I had put the initial sketch of this design into the "only exists in my sketchbook" bin. Then the client found it while flipping through my sketchbook.

Even though Salt Lake Rug Company is technically a new business, I tend to look at as a rebranding project. I had beed working with the owners for a little over a year before they decided to close the store and reopen under a new name complete with new identity, new facade — the whole enchilada.

The instructions were pretty simple. They wanted something modern, classy and completely removed from the previous business.

Located in the heart of downtown Salt Lake City, Salt Lake Rug Company was launched in 2014. Clients Toro and André run the place in true family fashion and have over 40 years of experience in the Oriental Rug trade between them. After the previous business (Broadway Oriental Rugs) closed permanently in 2013, the two were looking to shed the identity of the old store and build an entirely new brand.

The side-by-side comparison in the photo below illustrates the lack of any tangible brand. Additionally, there were numerous other treatments of the business name across multiple points of contact. By contrast, the new brand establishes a strong identity and is currently being  applied across consistently all media. 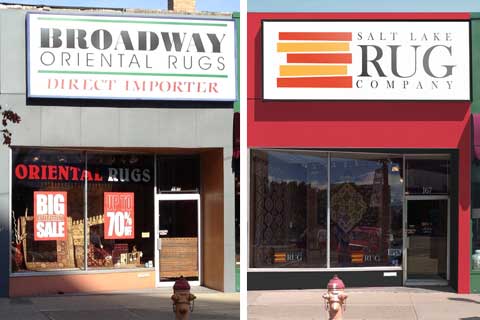 In the process of making a logo, a lot of sketches get made and some ideas inevitably win out over others. I tend to not show sketches to clients because they are raw. In the case of the Salt Lake Rug Company logo, André had spotted one of the exploratory pages from my sketchbook, flipped it open and saw his vision in rough form.

I admit I had a flash of dread (a-la-bride-of-frankenstein) at the thought of someone flipping through my sketchbook. I don't care if people see what is in it, but because I draw in it totally un-filtered and free form, there is the potential of taking something out of context.

Anyway, no kittens died and the sun came up the next day and clearly I was close to the client's vision for the new brand. Cha-Cha-Cha!

The logo you see today is actually derived from that sketch I had decided not to show — not because I thought it was bad, but because I thought other choices aligned closer to the brief. This is why it is so important to actively listen to your client and ask questions. Lots and lots of questions.